People don’t usually picture upstate New York and the Capital Region as a center of social activism. Until recently, it wasn’t. In light of recent events, however, THSNY volunteers and many others in the community have been speaking out and protesting the injustices that BIPOC (Black, Indigenous and People of Color) have to deal with on a daily basis. Taking action by signing petitions, donating, going to protests, and even just posting on social media is the fuel of this movement. This post highlights some of our volunteers who have been very active in their support of Black Lives Matter (BLM).

Maya Gerstenbluth and Alexandra Gallo are rising juniors at Niskayuna High School and area leads for Schenectady County. Maya G first got involved when she heard about the death of Breonna Taylor. She says, “When I found out about her murder, I was outraged. I came to the realization that the United States didn’t have as much equality as I thought it did. Then George Floyd was murdered. I think that his death lit a fire inside of people all around the world, including myself.” Alexandra “first got involved with activism because [she has] realized that [she is] not the type of person to stay silent in the face of injustice.” Ryana Sarcar is also a rising junior at Niskayuna High School and a customer service volunteer. What really inspires her is that “so many non-Black people are coming together and doing everything they can to support the movement, not just treating it as a social media trend. It is easy to remain neutral, but the number of people who are choosing to go through the obstacles to see to it that justice is served gives [her] hope that our generation will be the one to make the change.” Ananya Kothapally is a rising senior at Shaker High School and a delivery volunteer. “Surprisingly,” she says, “I first got involved by watching TikToks in support of the movement! That led me to some deep thinking on my race, my privilege, and my duty. As a dark-skinned Indian living in America, I felt it completely unfair and completely unjust that my Black classmates with the same skin color were in danger when I wasn’t. It was then that I realized that I needed to use my privilege for good.” Ananya started a GoFundMe to raise money for small business relief in the Albany area. The money raised funded a mural painted by Black children in the downtown Albany area. She also started an Instagram page called “Albany Against Brutality” that has amassed over 800 followers.

Maya G, Alexandra, Ryana, and Ananya have all been protesting, signing petitions, and donating when they can. Ryana says, “The BLM movement has opened [her] eyes to the fact that racism is just half the problem. What really scares [her] is the number of people who choose to stay silent and watch people say racist things and commit racist acts. When it comes to human rights, there is no being neutral. Neutrality is oppression. Anything that is not speaking out about injustice is promoting it. In fact, there is so much silence surrounding these issues that a lot of people do not even realize the severity of the oppression against Black people in America. This has helped [her] realize the importance of informing people about the harsh realities of Black people in the US because though it may burst people’s bubbles, it will help them realize as it did for [her], that these are not just stories; these are actual people’s lives. Non-Black people are privileged enough to not have lived through them in person, and now we must use that privilege to make sure that Black people don’t live like that either.” She also says that the best way to get others involved is to educate them. “Once you lift the veil shielding people from the harsh realities, they will be more compelled to join the fight. Talk about the systemic issues, such as the War on Drugs and the School-to-Prison Pipeline, but also the seemingly little things, like not finding Band-Aids that match one’s skin color, or having to fry one’s hair with chemicals in order to be accepted by society.” Maya G also acknowledges her privilege for the use of good, saying, “Black people go through things on an everyday basis that I will never experience as a white teenage girl. Being able to learn about Black people’s tragic experiences instead of living them is a privilege that I didn’t acknowledge until I got involved with BLM. I’m now striving to use my privilege for good, something I wasn’t doing well before.”

If you want to get involved but aren’t sure how, Ryana suggests to “Donate to credible organizations. Support Black-owned businesses. Sign petitions. Don’t make the mistake of thinking that petitions don’t help; public pressure through petitions is what reopened cases like Breonna Taylor’s and Elijah McClain’s. Most importantly, spread awareness! Use your social media platform—there are people listening to you. Tough as it may be, call out your friends, your family, and yourself for holding beliefs, biases, and privilege rooted in racism, because even the biggest of changes starts with just one person—you.” Ananya’s advice is, “Like Gandhi said, ‘be the change you want to see in the world.’ If you truly want equality for everyone, act in that manner. Also, don’t say the n-word!!” If you’re looking for relevant books, movies, or TV shows, Ryana and Ananya suggest the books Small, Great Things by Jodi Picoult, and Why Are All The Black Kids Sitting Together in the Cafeteria? by Beverly Daniel Tatum, the movies The Hate U Give (Hulu) and Fruitvale Station (Tubi), and the tv shows When They See Us (Netflix), Dear White People (Netflix), and Queen Sugar (Hulu).

People can be apprehensive about getting involved due to backlash from friends and family members. “Unfortunately,” Ryana says, “there are people who will attack you, make fun of you, and blatantly disrespect you for standing up for justice. In these times, it is always important to remember that if you are supporting human rights, you are automatically on the right side of history.” Alexandra says that “These reactions can be disheartening and difficult to deal with, but I know where I stand, and I’m not going to let other people change that. I believe that, as a nation, the first step in fixing these problems is admitting that these problems exist.” She also says, “I know it can be difficult, especially if your friends and family members aren’t supportive, but knowing that you’re helping to make a change makes it all worth it in the end.”

As volunteers for Teens Helping Seniors, Ryana, Alexandra, Maya G, and Ananya have served the Capital Region during the pandemic and supported many seniors. For advice as to what Teens Helping Seniors can do better for the future, Ryana says, “I think that giving people a platform to speak out about the BLM movement is a great start! Since COVID-19 is disproportionately affecting communities of color, maybe THS could look into making sure that such communities within the area are aware of our services.”

It may seem like you don’t have a voice or that what you say won’t make any difference but we have seen firsthand how that isn’t true. We (Amira and Maya D) recently came across a petition requesting the investigation of local businesses that have been linked to a violent white supremacy gang in our area. We hadn’t known about this issue before. When we signed the petition it had around 400 signatures. We posted it to our Instagram and Snapchat stories and before we knew it, many others were reposting this petition; as of writing this, it has over 500 signatures. We may not have big audiences or platforms, but we started the conversation. And sometimes that’s all it takes. As Maya G says, “All these people had lives, families, and their own beautiful souls.”, so it is our duty as human beings to honor the lives of those lost to systemic racism and police brutality and keep fighting for justice. Ananya Kothapally standing in front of the mural she raised money for. 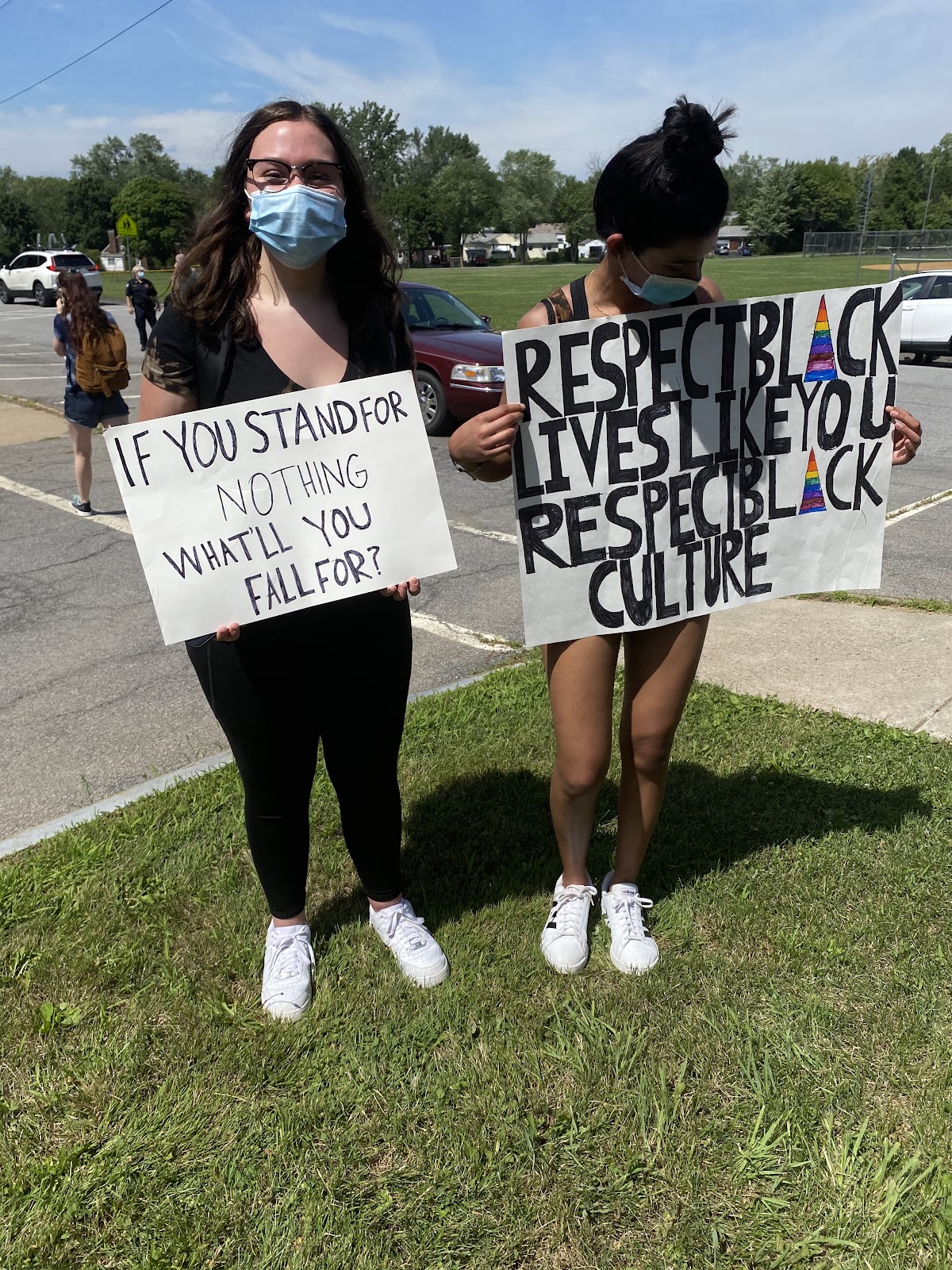 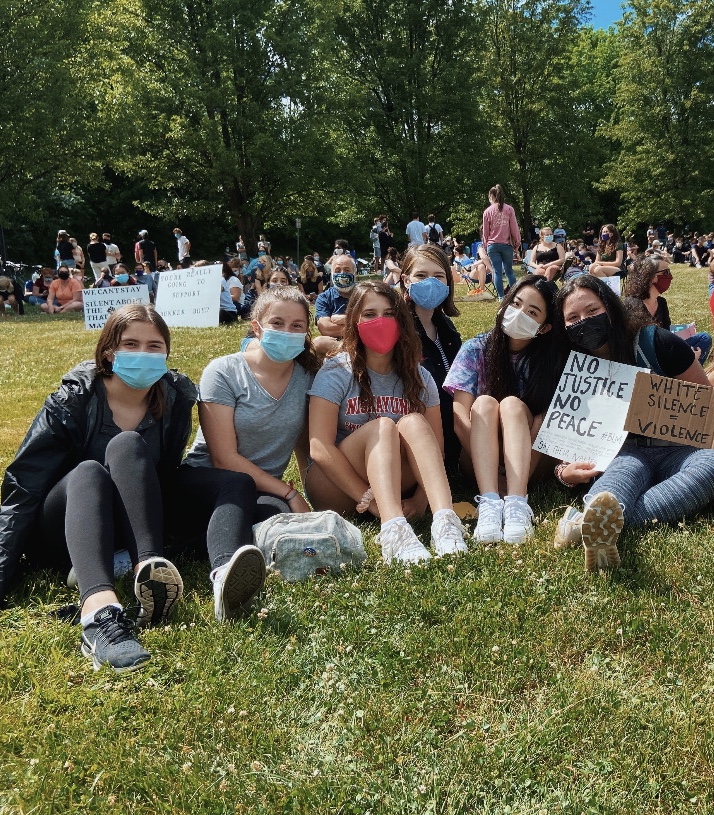